TALK ZONE: Guys Has This Ever Happened To You, How Did You Take It?

Hi guys,
If this has happened to you, I doubt if the sleep can remain the same,its not easy to regain the lost sleep😂😂😂
How do u react ??
Bite the person ,shout at the person,or you the type that can continue the sleep when u get on the bed or na to curse the persin wey wake u up????
Ehn how did u act???

OMG: If You Find Yourself In Such Situation, Guys What Will You Do???

Hey guys,
Na travel you wan travel ooo😂😂😂😂.
Just imagine u walked up to meet them fighting,some people will be like na my village people follow me reach herre😂😂
What will be your reaction???
Just for fun….
Slap the living hell out of the both of them???
Pray to God for divine intervention or na to dy scream???

Following the ongoing #EndSARS protests across the country to kick against police brutality, the Lagos State Government has reportedly lost N234m to the closure of tollgates in the state.

Despite the closure of the tollgates by protesters, the state government has continued to make money from adverts at the toll plazas.

According to a report by The Punch, the Lagos state government lost N234 million Naira due to the protests, and the figure was obtained from the daily and monthly targets set for the tollgates by the government, which owns the tollgates, which are being managed by the Lekki Concession Company.

The commissioner said the Lekki-Ikoyi Link Bridge was not expected to generate less than N300m monthly, while the Admiralty Circle Plaza generates about N500m monthly.

“At least 80,000 cars use the tollgates every day. The figure could be higher or lower depending on the day of the week. However, since the protests started, the Lekki tollgate has been completely shut, while the Ikoyi one has been left permanently open for people to use without payment,” he said.

Protesters have threatened that they won’t back down till their demands are totally met by the government.

JUST IN: OMG He Makes Me Happy – Slay Queen Who Went Viral After Showing Off Her Mechanic Boyfriend Speaks (See Photo)

A South African slay queen has finally broken her silence days after she went viral for showing off her boyfriend who is a mechanic.

The woman identified as Adv Boitshepo Kwena with the Twitter handle, @kwena_boitshepo had taken to social media to share photos after she visited her mechanic boyfriend at his working place.

Many people who liked the photo commented that it is indeed true love. However, others didn’t like that he showed off the boyfriend who was wearing dirty clothes.

Speaking via her recent tweet, she said he makes him happy, and she’s glad to be in a relationship with him because love is not about material things.

Replying a lady who asked her why she allowed him look dirty in the viral photo, she said;

“I think you being very emotional. Dont you take random pics. I wish you can understand what I trying to show- love is not about appearance and material things.”

Big Brother Naija housemate Tricky Tee, has allegedly requested N500k for appearance fee, before he would attend the EndSARS protest in Bayelsa State.

Recall that the EndSARS protest has been taken place is many major cities across the country, as celebrities in Nigeria lend their voice against police brutality and reform.

However, Tricky Tee has been called out by a protester on Twitter, for allegedly asking for appearance fee before he would attend the protest in Bayelsa.

The reality star who is an indigene of Bayelsa  State, had visited his state and was welcomed by the Governor after he left the BBNaija Lockdown house this year.

Nigerians have called him out for asking for money for appearance, when other A-list celebrities are coming out to protest for free.

The protester with the Twitter username @GlorYBaee, said the reality star was also offered logistics to come to the state, but insisted on collecting appearance fee.

“Lmaoo, Tricky tee said we should pay him 500k for appearance fee..  Just to come and lend his voice in #BayelsaProtest “

President Muhammadu Buhari has described former military Head of State, General Yakubu Gowon as “a gallant patriot whose commitment to national unity is beyond comparison in the annals of our chequered history.”

In a statement issued in Abuja on Sunday to mark the occasion of his 86th birthday anniversary, President Buhari remarked that “the role General Yakubu Gowon played in our political history and infrastructure development is etched in stone and cannot be rewritten.”
Buhari said “as young military officers, many of us regarded General Gowon as our role model because of his patriotism, commitment to unity and his humility.”

According to the President, “the Nigerian civil war brought out the most brilliant qualities of General Gowon as a visionary leader who put the interest of Nigeria before his own personal interest.”
He noted that “the former Head of State led a very impressive national reconciliation effort at the end of the civil war in order to heal the bitter emotional and psychological wounds of the fratricidal conflict.”

President Buhari added that “General Gowon is one of the fairest leaders I have ever known who has inspired so many future leaders.”

“Even in the context of Africa, many leaders in the continent draw inspiration from his adroit handling of the outcome of the civil war through his policy of ‘No Victor, No Vanquished,’” he further stated.

“As he marks 86 years of age, Nigerians cannot forget General Gowon’s immeasurable contributions to the unity and development of Nigeria. May God continue to bless him with more good health and the needed strength in understanding his ongoing spiritual engagements and service to humanity,” the President prayed.

He asked Niger Deltans to shun the protests against police brutality and scrapping of the Special Anti-Robbery Squad, SARS, and focus on the reinvention of the Sovereign State of Biafra.

In a Facebook post on Sunday, Asari addressed people of Niger Delta participating in the nationwide protests, which he said is a waste of time.

According to the ex-warlord, there is nothing to restructure about Nigeria, insisting that it is a waste of time cooperating with the Yorubas in the #ENDSARS protests, adding that the only solution for Niger Deltans is to team together with the Ogonis and the Igbos and Efiks and reinvent Biafra.

He said this was because nobody can oppress the Ijaw man in Biafra. Asari said that what the people need at the moment is political freedom and every other thing will come at the right time, “because you will control and hold your oil,” he said.

“Anything else is not going to work unless we stand up and fight for Biafra. Anybody talking about restructuring, Niger Delta republic or an Igbo Biafra is an enemy of our people because Biafra most surely come whether you like it or not.”

20 Secondary School Students Suspended After They Were Allegedly Caught Having Group Sex!

JUST IN: DStv, Gotv, Has Been Hacked By Anonymous – You Can View All Channels For Free Now!

The hacker group popularly known as “Anonymous” has hacked DStv and Gotv some hours ago and made all channels available for free. 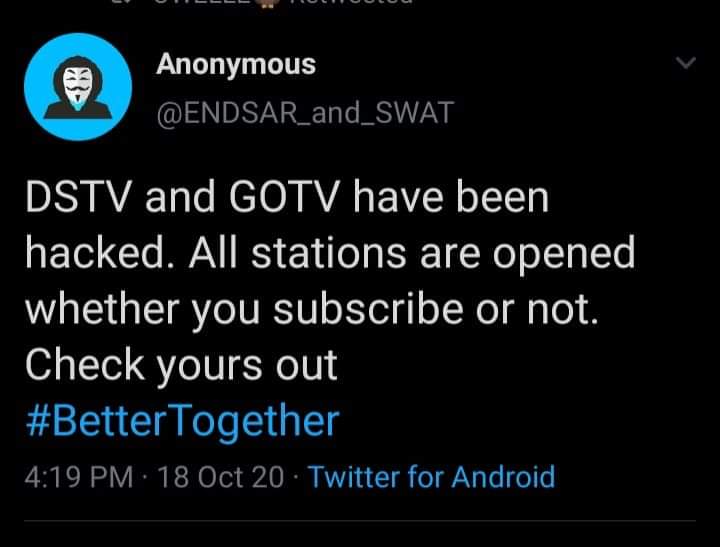 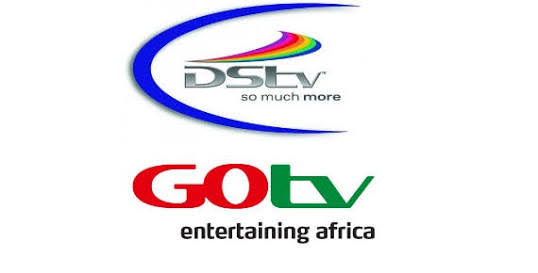